July’s Kitchen Gadget of the Month 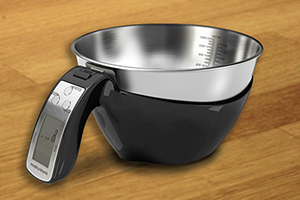 Any kitchen gadget that cuts down on the amount of washing up required is a winner with the gang here at Solid Wood Kitchen Cabinets.

This month’s gadget of choice is the 3 in 1 Digital Jug Scales from Morphy Richards. It’s the ideal companion for any kitchen, thanks to the novel idea of combining a stainless steel mixing bowl and scales in to one attractive gadget.

You can carry on adding ingredients and weighing them individually using the handy tare function, which zeros the scale after you’ve added the ingredient, meaning you really will cut down on the washing up.

Whether you’re baking a cake or making flapjacks by the dozen, this really is a handy gadget that will not only replace your tired scales, but eliminates the need for multiple separate mixing bowls. There’s also inbuilt volume indicator for oil, milk, water and flour.

The Digital Jug Scales are available in black, red and white, one of which will hopefully match your kitchen’s colour scheme. If you’re sold on the idea, then you can buy one direct from Morphy Richards for £22.49.

Have you found an interesting gadget or piece of kitchen tech that would suit solid wood kitchens? Share it with us on social media – look us up on Facebook, Twitter or on Google+.