To some, learning about kitchen history might seem daunting, dull or pointless, but in fact it can be a very useful design tool. For example, you might want to be sympathetic to the age of your property by designing a kitchen based on the period that it was built. Or, you might just love a specific decade and want to incorporate it into your home. Kitchens have changed dramatically over the years and are almost unrecognisable compared to how they once looked. Factors such as attitudes to food and cooking, socio-economic changes, design, and, of course, advances in technology have all shaped the way our kitchens have evolved. In this blog post, we will look at the design features from Regency, Victorian, and Edwardian eras and show you how you can replicate them in your own kitchen. The Regency period brought about a lot of social, political, and economic change as well as advances in architecture – some of which were brought into the homes of the public. With their grand facades, Regency houses are instantly recognisable and inside this grandeur continues. However, in Regency times cooking was seen as a job for the servants, and as a result, kitchens were located in the basement, as far away from the main house as possible. Nowadays, the kitchens in regency houses are much more central and just as majestic as the other rooms in the house.

If you live in a Regency house, there are many features that you can introduce into your kitchen to make it feel more faithful to the period. Granite worktops are great for adding authenticity, however, they can be expensive. Instead, Granite Effect Worktops are a much more economical choice and give just as good an effect as the real thing. Belfast sinks together with bridge taps are a Regency match made in heaven, whilst adding twister drop handles or smooth cup handles to your drawers will give you elegant details that align perfectly with Regency kitchen history. 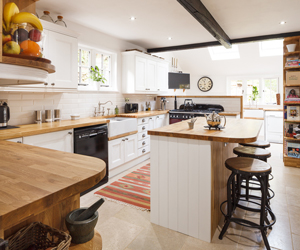 By the Victorian era, kitchens were still really only for the middle and upper classes. The appearance of a new culinary development – the three-course meal – indicated a significant change in attitudes towards food and meal times, and although the kitchen was still being located away from the main part of the house, grander, less utilitarian styles were starting to emerge.

In many ways, a Victorian style kitchen is similar to a Regency style and again we see belfast sinks helping to achieve the look. Large wooden tables hint at traditionalism but you could replace this with a kitchen island. Twisted pilasters were a feature that was quite common in a Victorian kitchen and the use of freestanding units to display your items, especially if those items are made from copper, is also a useful way to inject that Victorian feel. 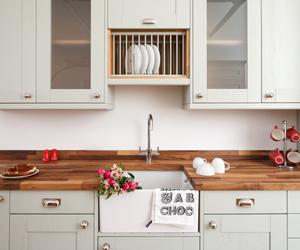 The Edwardian period was a significant point in kitchen history. The use of gas and electricity was becoming more common and domestic boilers, ovens, and refrigerators were the brand-new technology of the era. Likewise, clean water was now almost universally available so sinks became a much more important feature than ever before. Sanitation was fast becoming of paramount importance and the kitchen reflected this by introducing surgical white glazed wall tiles and glass-fronted cabinets instead of open shelving.

If your house was built between 1890 and 1914, you might want to consider these design tips to create an Edwardian style kitchen. First of all, avoid copper materials as this was considered obsolete. Instead, use enamelled iron or something similar like these Edison D handles or Edison knobs. You should avoid open shelving and instead, install glazed doors. On the whole, kitchens were white because it was seen to be more hygienic, but bolder colours were often used on floors and furniture.