We use cookies to give you the best experience on our website - if you are happy with this, just continue shopping. Alternatively, you can find more information in our cookie policy.
Acknowledge & CloseOk
Save up to £2000 on your new kitchen Save up to £2000 - Ends 30th January 30/1/21
Find out more
×

November’s Kitchen Gadget of the Month 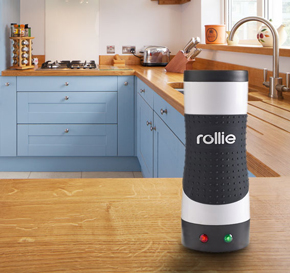 Kitchen gadgets seem to get more exciting with every passing month, and this month’s featured foody device is no exception.

The Rollie Eggmaster has already been a big hit across the pond in America, and it’s now caught on in the British Isles, too; making it easier than ever to whip up starters, canapés and much more.

Don’t be fooled by the Rollie’s simple appearance; it’s actually a vertical non-stick grill that can whip up salmon pinwheels, egg and bacon bites or mini tortilla wraps in mere minutes.

You don’t have to be some kind of culinary expert, either. The Rollie makes it easy to create quick yet satisfying meals and desserts, and its configuration means that the presentation is likely to be dainty and precise – meaning that your food will look as though it’s been cooked up by a real pro! It also comes with a ‘packing rod’ that enables you to cook meat or batter, thus further expanding this unique grill’s capabilities.

If this sounds like a perfect addition to your oak kitchens, you can pick up the Rollie in the UK for only £29.99 from Lakeland. We’re certainly pondering putting it on our Christmas list!

If you’ve tried the Rollie Eggmaster, or know of another gadget we should feature on a future Gadget of the Month blog, then do get in touch! We’re always keen for a chat over on Facebook, Pinterest, Twitter and Google+.