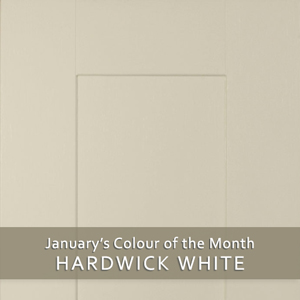 January is firmly in full swing, and having posted an entire year of colours from Farrow & Ball throughout 2014, we’re now publishing the final ‘Colour of the Month’ from our standard range.

This particular shade, Hardwick White, comes from the ‘Accents’ range: a collection of prominent colours that contrast kindly with solid oak kitchen cabinets – bright enough to stand out alone, as well as working alongside many lighter colours.

Hardwick White is not – as the name might suggest – a shade of white; in fact it’s more of a light grey, with attractive green hues. It takes its name from the limewash used to paint the interior of Hardwick Hall in Derbyshire.

Depending how much natural light your kitchen gets, Hardwick White can be a rather changeable colour, shifting between light shades of green, blue, brown and grey. In cold winter light, blue and grey accents will be exposed, whilst in warmer evening and summer light from the south, it shifts towards greens and browns.

In dark and smaller rooms, Hardwick White can look particularly intensive, and becomes quite dusky, particularly when plenty of layers are applied, and so is often best combined with a bright white such as Farrow & Ball’s All White. Equally, it holds its own alongside stronger colours such as Red Earth or Terre D’Egypte.

If you would like an easy way of seeing how Hardwick White will appear in your kitchen, then why not order one of our pre-painted kitchen door samples? These miniature versions of our oak cabinet frontals measure 355mm x 296mm and are available in any of Farrow & Ball’s shades for just £20 including delivery. To make them even more enticing, if you go on to place an order for your wooden kitchen components with us, the cost will be refunded – even more reason to try out a myriad of colours within your home!