Are William Morris Tea Towels the Next Big Thing?

William Morris once said “have nothing in your houses that you do not know to be useful or believe to be beautiful”; fortunately we think our solid wood kitchens are both. The textile designer with a penchant for nature themed prints has remained popular throughout the century following his death, but it has now been suggested that William Morris tea towels are responsible, at least in part, for a resurgence in popularity.

During his lifetime, William Morris designed a huge variety of block printed wallpapers, embroideries, ceramics, furniture and stained glass, and his popular prints have now been featured on a huge range of products from curtains to cushion covers and clothing. The symmetrical patterns make Morris a British icon, and for those wishing to pay homage we have compiled a list of our favourite themed kitchen products below. 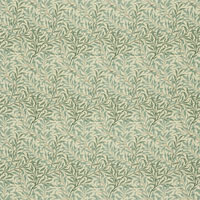 Arguably the most popular William Morris design, this instantly recognisable print has not been out of production since its inception in 1887. This would look particularly striking in a country kitchen and is not an overpowering option for walls as it features fewer colours than many other William Morris patterns. The delicate print is immediately recognisable with stems and leaves entwined throughout. 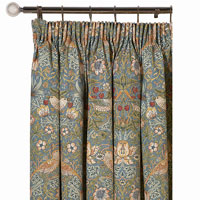 For a more subtle look, these Strawberry Thief curtains provide a large enough area for the print to be showcased in all its beauty without being overwhelming in a smaller space. The playful design has small birds stealing strawberries from plants that are woven across the pattern. With a number of different hues featured, this could work well in a variety of kitchen styles and colour schemes. 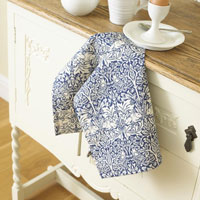 The Telegraph recently suggested that William Morris tea towels were partially responsible for the resurgence in popularity, and looking at this design from Laura’s Beau, it is easy to see why. The intricately detailed Brother Rabbit print is two-tone, making it easy to work into any style of kitchen. The white base of this pattern gives it a more modern feel, and the inky blue tones would look great alongside Royal Doulton or Cornishware dinner sets. 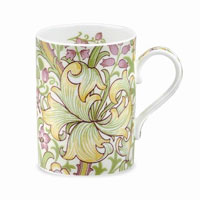 If the thought of a William Morris tea towel seems a bit much, this beautiful mug is a fantastic way to bring a subtle hint of William Morris into your kitchen. The Golden Lily pattern was actually designed by John Henry Dearle, who was trained by William Morris. This print is less symmetrical than other patterns and although it is recognisable as a ‘Morris’ design, it is clear that it has a slightly different origin than others in the collection.

We think William Morris tea towels could be the next big thing – do you have any William Morris in your kitchen? We would love to see it, so why not tag us in your photos on Facebook or Twitter.