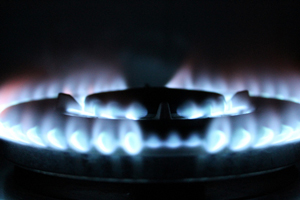 A cooker hob is often the most widely-used appliance in any kitchen – more so than the oven or any more specialist smaller kitchen gadgetry.
In contemporary solid oak kitchens, the hob doesn’t necessarily have to be part of the cooker itself, and therefore can be situated wherever it would best suit in your kitchen.

You might prefer to have your ovens built in to full-height cabinets so that you can more easily monitor progress of your dish, meaning the hob needs to simply be positioned somewhere in your kitchen that allows plenty of food preparation space either side, and can have an extraction fan fitted above it.

All hobs are built-in and fitted as part of the countertop, so if you are still in the planning stages of your new kitchen, consider asking us to have a hole cut into your wooden worktops to accommodate your chosen hob. Get in touch to discuss this further with one of our advisors. 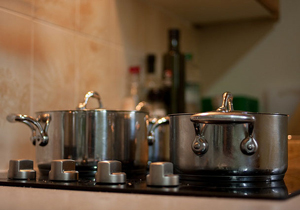 There isn’t a standard size of hobs, but many use a similar design which consists of four burners / heat zones on a rectangular panel measuring approximately 600mm wide by 500mm deep. Allow sufficient room on the worktop where you are situating the hob to ensure there is room at both the front and back.

Some 5-burner hobs are 700mm wide, but are designed to fit into a 600mm aperture by overlapping the work surface. Even larger 800mm and 900mm hobs are available, and may have up to 8 burners (or zones on an electric hob). The most common configuration of burners would be to have one large, two medium and one simmering hob.

You will often see an “aperture size requirement” listed in a hob’s specification. This is the amount of depth required in the hole that the hob sits in. This requirement means you will not be able to have a drawer or cupboard directly below the hob, and may need a dummy drawer front to cover the area used.

There are a variety of hobs available, but do keep in mind that certain hob types may only be suitable for certain cookware. For instance, you should not use aluminium pans on ceramic hobs, as it will react with the surface and discolour it. Also be careful using cast iron pans and skillets on glass-topped hobs as they may scratch the surface if you slide the pan around rather than lifting it. Anything other than steel or iron pans will simply not work on induction hobs due to the way they work.

All hobs are either gas or electric, and which will suit your kitchen best depends partly on your cooking habits, but also on the supply available in your home. Gas hobs must be installed by a Gas Safe registered engineer, and will need to be placed within reasonable distance from the gas supply outlet in your kitchen. Most gas hobs run on ‘natural’ gas, but some models can be converted to run on LPG using an LPG conversion kit.

Electric hobs – and some gas ones too – require connecting directly to the mains electricity supply by hardwiring them. This should be done by a qualified electrician to ensure correct and safe installation. 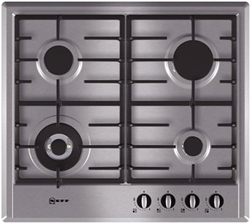 Gas fuelled hobs are as popular as ever because the heat is visible, and can be easily controlled to provide a more precise cooking environment. Due to the way the heat is radiated from a gas hob, it also makes it more usable with any type of cooking pans such as woks and ceramic griddle pans.

Most gas hobs have mains power for ignition. Some have automatic ignition when you turn the burner’s hob, whilst others require you to press and hold a button as you turn the knob. 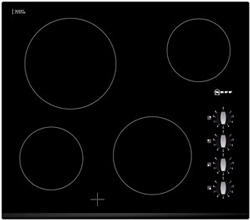 Other than gas hobs, ceramic hobs are the most popular type of hob. They have a glass surface with heating elements hidden beneath.

They have an easy-to-clean surface and often come with touch finger controls. Some have sensors that will turn down or cut the heat when a pan isn’t on the hob. All modern ceramic hobs have residual heat lights that will let you know when it’s cool enough to touch.

Induction hobs looks similar to ceramic hobs and have many of the same features, but work by using circular coils underneath which generate a magnetic field that induces heat into a pan (ferrous materials only – not ceramic) when placed onto the hob.

Induction hobs are considered to be by far the most efficient, and are also considerably safer as the hob surface itself does not get especially hot. Like ceramic hobs, they are also very easy to wipe clean.

Domino hobs come in ceramic, induction and gas variants, and are simply a smaller type of hob – perfect either as an additional hob next to your existing one, or for small kitchens in studio apartments where there isn’t enough worktop space for a full-sized hob.

Alternatively, you can install a number of domino hobs side-by-side in order to create a versatile cooking area. BBQ grills, deep fat fryers, hot plates and many more modules are now available.

After reading through this guide, we hope you now have all the information necessary to make a considered decision when buying a new hob for your kitchen. Our kitchen showrooms have a range of hobs on display from Neff and other top appliance manufacturers. Feel free to pay us a visit if you are still planning your new kitchen – our kitchen showroom manager will be happy to talk through the options available.

I consent that the information I have provided may be used by Direct Online Services LTD for continued correspondence. You may opt out at any time by contacting us, or via the 'Unsubscribe' link at the bottom of any email correspondence. Please view our privacy policy for further information.