Cooking in a kitchen can fill a house with inviting aromas, but sometimes – whether you’ve got it wrong, or just need to clear the air – you want to evacuate the kitchen of smoke, steam and smells.

This is where a cooker hood comes in, and whilst these items used to prioritise function over form, cooker hoods have come a long way and are now an intrinsic part of many kitchen designs. To help you choose the right model for oak kitchens, we have put this guide together to cover some of the key considerations. 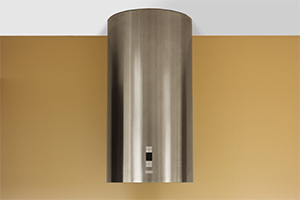 It may seem that a recirculation cooker hood is the obvious option, but recirculating the air does have considerable disadvantages over extracting it. It does help reduce smoke and unwanted smells, but it doesn’t do much to remove heat and moisture from the kitchen. You will also have to replace the charcoal filters regularly, as if they are left for too long or become overloaded they will start to leak anything adsorbed back into the air. Due to these filters they also tend to have a lower airflow rate, so are less efficient at clearing a kitchen of smoke or steam. 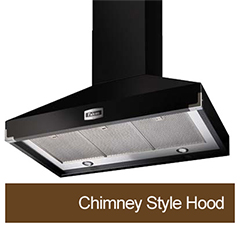 The most common type of hood is the chimney style. They are usually designed to be mounted on a wall, and often cover the full width of the oven’s hob. They look very similar to an ‘island’ hood, but usually have one side which is not intended to be on show, with the option of the flue either exiting out of the back or the top of the unit. These units should be mounted approximately 75cm above the hob for the hood to work most efficiently. 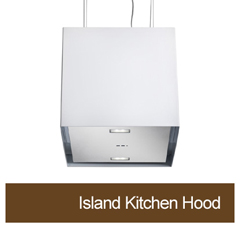 Whether you have situated your oven on a kitchen island, or just want additional ventilation over this popular preparation area, an island hood comes in two designs: recirculation (as pictured) or a chimney style similar to that shown above. Recirculation hoods are ideal if you cannot easily fit a ventilation pipe above your island. If you do have the chance to fit a flue pipe, then a chimney style with a vertical exit is probably best. 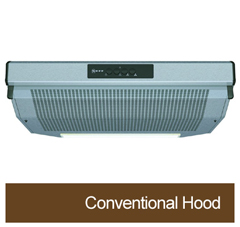 This is the cheapest and most traditional type of hood – it sticks directly out of the wall and is usually designed for standard 60cm width ovens. Rather than having a chimney, the air is ventilated directly out of the rear of the unit, so positioning of the flue pipe must be carefully considered. This type of hood is sometimes used underneath kitchen wall units, but is mostly used as a free-floating hood. 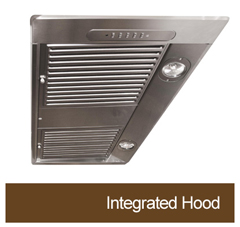 This type of hood is built directly into the cabinets above your hob and hidden with a panel or door. Most integrated hoods are standard 60cm widths, though larger models are available (like the 720mm wide Falcon model pictured). This option is perfect for anyone wanting their cooker hood to be hidden from view.

What extraction rate is needed?

The extraction rate indicates the speed that the hood will filter air from your kitchen. The higher the number, the quicker it will be able to ventilate, but this often comes with the cost of additional fan noise.

To ensure you have sufficient extraction from your new cooker hood, we would recommend a hood that can extract the air from your kitchen at least 10 times an hour – though more would be better.

How much will my hood cost to run?

Unlike most other appliances, cooker hoods are not usually subject to any kind of energy rating so it can be difficult to work out exactly how much they will cost to run. As a basic rule of thumb, the more lights the cooker hood has and the higher the rate of extraction, the more it will cost to run. Look for hoods that use LED lighting to save on energy usage. Also consider the cost of filter replacement, which will cost anywhere from £10 to £80 every 12-18 months for a carbon filter – depending on the model.

How much does a cooker hood cost? 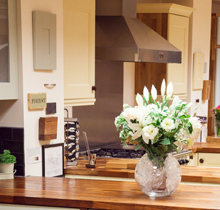 Cooker hoods can be found for well under £200, and go way above £1000 depending on the make, model and design of the hood. Pricier hoods often have quieter fans, better sound-proofing, more efficient filtration and better lighting.

Conventional hoods are often the cheapest type of hood, coming in at around £200. Chimney hoods have become considerably cheaper in recent years, costing anywhere from £200 to £400. Island hoods cost a similar amount, but as with any kitchen appliance, you can spend considerably more for a designer look.

If you’d like to see a range of cooker hoods in situation, then why not pay a visit to our Gloucester showroom? We have a variety of Falcon, Neff and Mercury hoods on display in our demonstration kitchens. We also offer a range of matching splashbacks for kitchens in stainless steel and glass.

Other readers also visited these other blogs and guides: 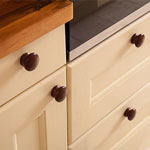 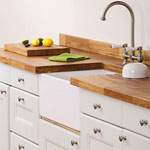 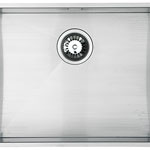 Choosing a Sink and Tap for your Kitchen 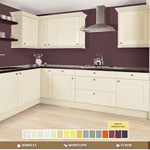 Note: This guide was originally published on 19th September 2014 but was updated on 21st March 2018 to include additional information.

I consent that the information I have provided may be used by Direct Online Services LTD for continued correspondence. You may opt out at any time by contacting us, or via the 'Unsubscribe' link at the bottom of any email correspondence. Please view our privacy policy for further information.